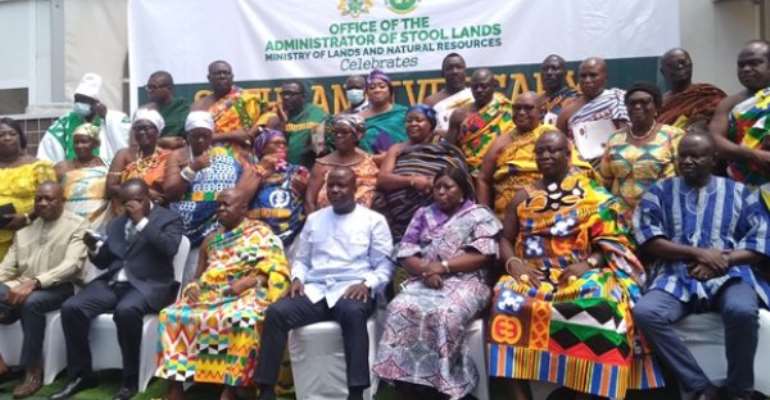 The Asantehene, Otumfuo Osei Tutu II, has applauded the Office of the Administrator of Stool Lands for effective administration of stool lands over the past 25 years.

He said the performance of the Office since its establishment in 1996 was remarkable and deserved commendation for its role in the administration of stool lands in Ghana.

The Asante King gave the commendation during a two-day conference to mark the 25th anniversary of the Office in Kumasi.

The theme chosen for the event was, “OASL at 25 – Assessing the Past, Redefining the Future of Customary Land Administration.”

It was attended by stakeholders in the stool lands administration, including chiefs, staff of OASL and the sector Minister, Mr. Samuel Abu Jinapor.

Otumfuo in a statement read on his behalf paid glowing tribute to the OASL for being one of the public revenue mobilization institutions that had stayed out of scandals over the years.

“We are all aware of the public perception of many government agencies in the country. With your core mandate to mobilize stool lands revenue, one would have expected scandals upon scandals attributed to you,” he observed.He further stated that, “your operations are so smooth that the public doesn't hear anything negative about you as an institution.”

He said 99 per cent of lands in the Ashanti Region were vested in the Golden Stool and stressed the need for regular consultations between the land sector agencies, land courts in the Region and traditional authorities in land adjudications.

Customary laws, he noted, were recognized as part of our common laws per Article 11 of the 1992 Constitution and impressed on judges to be abreast with the customary land laws in various parts of the country.

This, according to him, would prevent the embarrassment of giving judgment on land ownership in favour of families when there were no family lands in Ashanti.

Mr. Samuel Abu Jinapor, the Minister for Lands and Natural Resources, commended the OASL for the critical role it was playing in the administration of stool lands.

He said through the instrumentality of the Office, working with the traditional and local authorities, stool lands revenues had been utilized for the direct benefit of subjects of the stools through projects like schools, hospitals, markets, courts, police stations, fire service stations and potable water.

Despite these successes, the Minister said, there were still challenges that the Office must tackle head-on for the proper administration of stool lands.

“Most of these issues would require the collaboration of Nananom, the Lands Commission and other state agencies specified by the OASL Act, 1994,” he recommended.

He mentioned multiple sale of lands, misappropriation of stool lands revenue and stool land boundary disputes as some of the challenges that must be addressed.

Maame Ama Edumadze Acquah, the Administrator of Stool Lands, said the conference also sought to solicit the views of stakeholders to strategise for the future of the Office.

She said the Office was mandated by Article 267 of the 1992 Constitution and the OASL Act, 1994, to open stool lands account for all stools to collect all rents, dues, royalties and other revenues whether in the nature of income or capital from stools and skins for disbursement to beneficiaries.

“Similarly, the Office coordinates with all relevant public agencies and traditional authorities in preparing policy frameworks for the rational and productive development and management of stool lands,” she pointed out.

My visit to Ahafo Regional capital will be history - Kofi Mole

Police Officer found dead in her car at Effiduase

The Christian’s response to threats like COVID-19 is fasting...

“Let me state, without any form of equivocation, that these deployments are not...

Vice-President Dr Mahamudu Bawumia has paid a glowing tribute to the National Chief...

A group of irate youth of the governing New Patriotic Party (NPP) in the Dormaa...

Domelevo leave is an attempt to cover-up government’s Covid-19...

The Minority in Parliament says the president’s ordering the Auditor General to...

I’ll deal with ‘callous agenda’ of Ahwoi, others soon –...

Twelve out of Ghana's sixteen regions have recorded confirmed cases of the Coronavirus.

Coronavirus: It’ll be a disaster to send students home...

Breaking news! Otumfuo is in trouble after another Ghanaian...